More than one thousand years ago, Briccius and his three brothers emigrated from Denmark to Constantinople where they served the Emperor Leo. Because of their exemplary religious and moral conduct and their unusual talents, they quickly gained favor with the emperor.

Briccius became one of the emperor’s greatest commanders; one who was always victorious in battles fought defending the empire. Although Briccius was very loyal to his emperor, he was deeply concerned that his patron was merely a tepid Christian who had little faith in Christianity. He therefore prayed to God for a sign which would allow the emperor to strengthen his faith.

One day, a merchant stabbed a knife through a picture of the savor hanging in a Christian church in an attempt to test the powers of the Christian God. Suddenly, blood began pouring out of the painting as if it were a human body. The stranger, shocked by this miracle, ran into the street and confessed his wrongdoing to a priest. He was baptized and soon became a zealous Christian.

When the emperor heard about this miracle, he immediately went to the church, followed by a great multitude, witnessed this miraculous event with his own eyes, and was immediately converted from his unbelief. The holy blood was caught in a little bottle and soon became a highly worshipped religious relic.

Briccius remained in Constantinople for many years; however his heart grew sad, longing for his home. He decided to return to Denmark to preach the gospel to the heathens.  When he revealed his intentions to the emperor, the emperor would not hear of it. However the persistent plea of his loyal servant finally convinced him to release Briccius from his duties. Graciously the emperor granted him one last request. Briccius asked for the vial of holy blood. The emperor was not very pleased with this request as he did not want to lose this precious possession. He gave Briccius three days in which to reconsider his request, expecting Briccius to change his mind. Now in the room Briccius occupied, there were three costly bottles from which to choose.

The emperor’s only daughter had secretly fallen in love with Briccius because of his virtue and merit. Disguising herself as a maid, she sneaked into his room with food and drink to stand by him as he made his choice. She suggested he should take the bottle on which no fly would land.

When the three days were up, Briccius did as the emperor’s daughter had suggested and received the actual bottle containing the holy blood. The emperor could not object and allowed Briccius to take the bottle with him. Briccius proclaimed he would be taking it to a land where it would be more highly valued. However, Leo had secretly plotted to steal his possession back.

Briccius wrapped himself in pilgrim’s clothing and began his journey back to his home in the north. His three brothers accompanied him, as they all loved each other dearly and did not want to serve another day in the emperor’s court without one another.

The four brothers had barely made it beyond the city walls when the treacherous ruler sent a number of his servants out to retrieve the bottle from Briccius. However the four brothers were on their guard and evaded capture by leaving the road. Briccius then hid the little bottle in a self-inflicted wound in his thigh.

In a short time, the wound, covered with dirt, had healed, concealing the valuable possession the pilgrim carried with him hidden within his own flesh.

They traveled through the land and reached Carinthia unscathed. Briccius wanted to continue along the Mölltal across the Tauern to the north. The other three brothers, however, decided to stay in Carinthia and somewhere near Sachsenburg is where they are said to have parted ways. One of the brothers traveled down to the Drautal valley and settled at the Oswaldiberg mountain. The mountain is said to be named after him. The other brother reached Kötschach in the Gailtal valley, where, according to legend, he found his final resting-place in a church. The third brother became the founder of a settlement in the Niklai above Sachsenburg and because of his religious convictions, received the name “the holy man”.

Even today, many legends circulate about his extraordinary deeds. Briccius traveled to the Mölltal valley north toward the high mountains. However one stormy night he lost his way and was buried in an avalanche.

When the mountain farmers began to harvest their hay before Christmas, as is the custom in this region, they found three beautiful green strands of hay standing in the snow near the site where the village of Heiligenblut is today and exactly on the spot where the Briccius Chapel now stands. Astounded by this incomprehensible miracle they began to dig in the snow and soon came across the holy man’s body – for they believed he was such, since the three strands of hay were growing out of his heart. Now, this man was to be entombed, they decided to let God decide where Briccius should be buried. They loaded the corpse onto a wagon, pulled by two unbroken oxen and let them be on their way. Wherever the wagon would stop is where they would bury the man and erect a church.

The oxen carried the corpse over the Möll and didn’t stop until they had reached the hill on which the church of Heiligenblut stands today. The oxen would not be moved once they reached this spot, so the men unloaded the corpse from the wagon and buried it on the hill.

After a few days the villagers noticed that one of the corpse’s feet had emerged from the grave and on closer inspection they saw the little bottle containing a dark fluid hidden in the flesh.

The villagers removed the bottle and again buried the body. The foot never appeared again.

The mysterious bottle, along with the ring and the parchment found on the body, were all sent to the archbishop in Salzburg, who in turn demanded an explanation from the patriarch in Constantinople. Through this, the story about the holy blood became common knowledge in the western world.

In the Heiligenblut church there are fourteen paintings depicting the life and death of the blessed Briccius. The little green bottle which was found on the pilgrim’s body is now displayed atop a high pillar in a tastefully erected monstrance.

A set of stairs in the middle of the church leads down to the burial vault, where the religious man’s casket-like tomb is on display. Heiligenblut owes its name to this man’s wondrous gift. 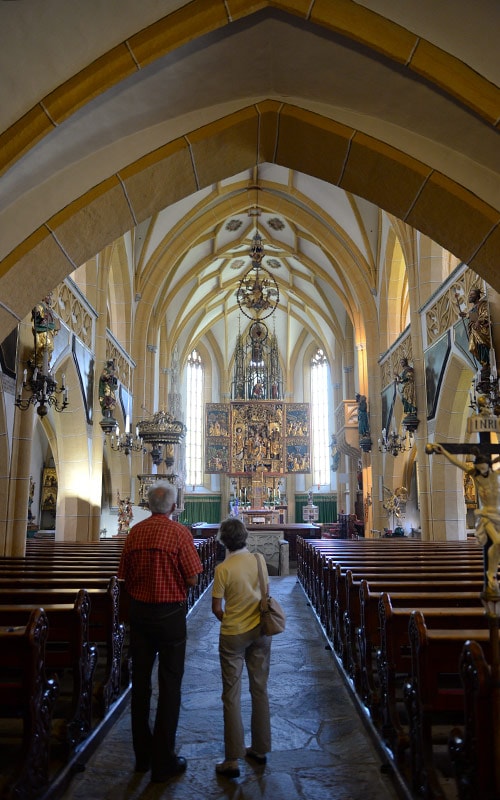 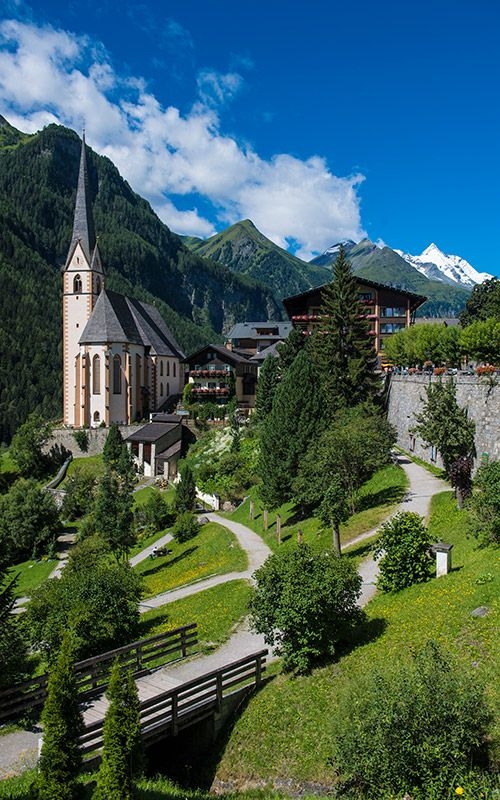 Calculate and book your stay online, with immediate confirmation, easily in just a few steps, in only 2 minutes!

Ask for an offer simply, in just a few minutes! We shall send you a personalised offer within no more than 24 hours!